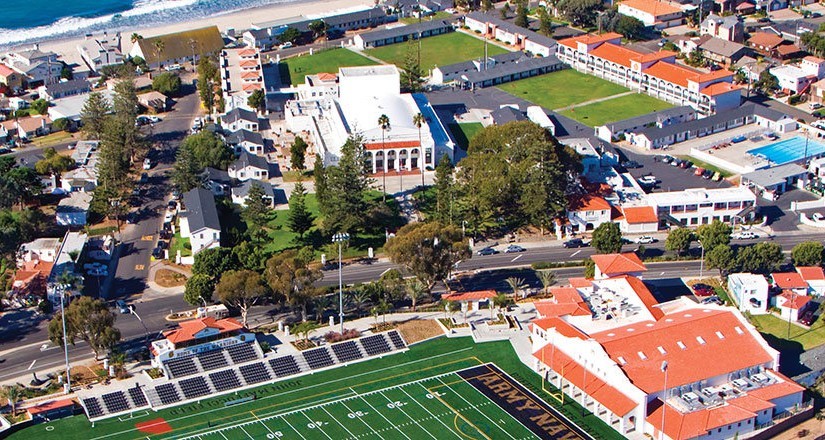 California boasts of several quality options if you are a parent seeking a military school education for your children. With schools located on the coast and in mid-California, there are also choices for different geographical experiences. The schools offer both public and private secondary educational opportunities, and include one of the seven maritime academies in the United States.

Founded in 1889, St. Catherine’s Academy has a number of characteristics that make it unique among California schools and military schools nationally.

Boasting a Catholic origin, the school is one of two in California for boys and is the one school that is focused on boys from kindergarten to eighth grade. Also, St. Catherine’s offers a boarding program (five and seven day) for boys in the fourth to eighth grades.

The students live in a military environment throughout the day, wearing uniforms and participating in drill and leadership exercises. The school also imposes a military-style discipline that includes marching to classes in formation and the use of merits and demerits.

The academics and daily life reflect the emphasis on boys and military learning methods. The goal is to ensure the school’s graduates are accepted at the better high schools and prep schools throughout the nation.

Spiritual development and guidance is a very strong part of the St. Catherine’s experience. The staff and faculty incorporate spiritual lessons into the curriculum and other activities. A major emphasis is placed on service and the application of Christian values of respect and reverence. A major presence on the campus is maintained by the Dominican Sisters in resident care, administration, and teaching.

A part of the Perris Union School District, California Military Institute is a publicly-funded charter school that follows the Army/National Guard JROTC military model. Approximately 750 students (largest in the California Cadet Corps) in grades 7 to 12 attending the school are referred to as cadets. All students wear army-style uniforms, which are provided at no cost to the parents.

While the school’s mission calls for a commitment to high academic standards and rigorous self-discipline, the school has struggled in some of its efforts. CMI is not one of the highest performing schools in the state, and is only ranked as number 548 among California secondary schools and 2,494 nationally.

The student body is highly diversified, divided roughly 50-50 between make and female, and 95 percent of the attendees considered minorities.

CMI was the focus of a pilot video program for California schools, It’s My School.

One of the state’s newest military academies, Oakland Military Institute was founded in 2001. However, it has quickly gained a reputation as an excellent college preparatory school, ranking 158 among all California secondary schools.

While the school started its operations at the site of the Oakland Army Base, it has moved to a modern facility that includes 15,000 square feet of state-of-the-art classrooms, computer labs, and virtual learning capabilities. The school uses a number of Internet-based educational programs and has an active academic support program for students.

This environment has produced a number of graduates who have gained entrance to top-tier colleges and universities, including Yale, West Point, and the U.S. Naval Academy.

OMI has gained respect in a number of competitive activities, including band, drill and color guard. Students participate in competitions throughout the Western United States. Many students participate in the annual summer camps that are structured around academic requirements. OMI also boasts an active Parent Advisory Council that helps support many of the school’s events and activities.

As a private school, OMI has a competitive admissions process and applications must be submitted by late May of each year. All applicants are required to attend a week-long entrance camp before acceptance and admission.

Founded in 2000, the La Sierra Military Academies are a group of three charter schools, including:

Cadets at La Sierra live in a culture that is adopted from the uniforms, traditions, and practices of the U.S. Army. The schools focus on students who are willing to commit to ‘honor, leadership, postsecondary ambition and service.’

La Sierra is co-ed and the students wear military uniforms as a part of their environment. A structured approach to academics and activities is used to reinforce the goal of teaching the concept of service and developing leaders. As a part of this process, all students must complete 40 hours of community service each year.

In addition to the core curriculum and electives, cadets receive training in Military Science, Drill and Ceremony, and Military Etiquette.

A School of Choice

Admission to La Sierra Military Academy requires several steps, including the submission of an application, undergoing an interview process, and a formal commitment when accepted. The school provides weekly tours for parents and students considering attendance.

Cal Maritime is a unique institution, and operates as one of the 23 campuses of the California State University system. As the only West Coast maritime academy that grants degrees, this school is a popular choice for many seeking a career in maritime-related areas.

Located at the northern end of San Francisco Bay, the waterside campus has a beautiful view of the world’s maritime traffic transiting the Bay. There are six majors at the school, all related to maritime specialties. These include:

While Cal Maritime students wear uniforms and the school operates with values similar to the military academies, students incur no obligation to serve in the military. However, the academy has an outstanding reputation within the maritime community and its graduates are highly recruited by numerous global companies. Additionally, the roughly 1,000 students find ready acceptance at graduate schools if they desire to follow post-graduate studies.

Other than California Maritime Academy, California does not offer any in-state senior or junior military colleges. There are also no alternatives for such schools in bordering states.

However, there are a number of Reserve Officer Training Corp opportunities at colleges and universities, and more than 40 secondary schools offering JROTC programs.