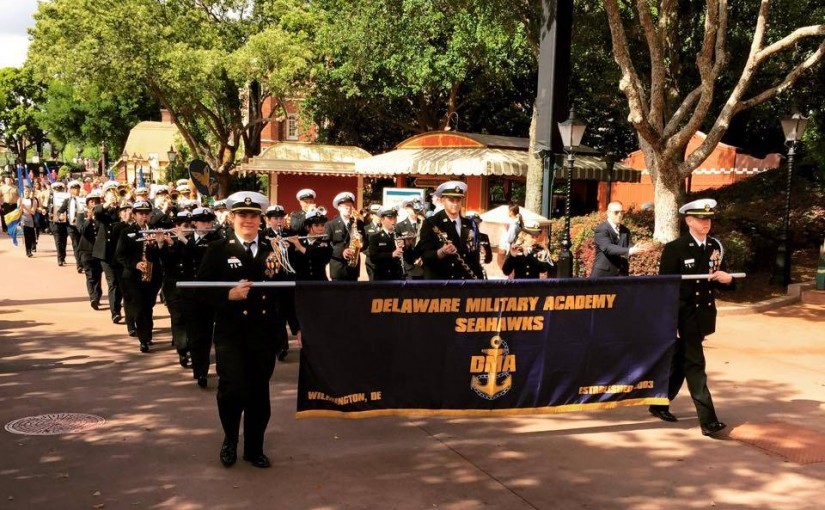 As the first of the original 13 states to ratify the federal Constitution, the small state of Delaware  holds a significant place in the history of the formation of the United States Government.

Today, Delaware is home to the Dover Air Force Base, which was established during World War II, and now stands as the largest aerial superport in the United States.  The small state of Delaware is also home to the Delaware Military Academy, a coed public junior reserve officer training corps program (JROTC) offering young men and women in grades 9 – 12 a military style education.

In addition, the United States Naval Academy is located a mere hour from the Delaware-Maryland boarder in Annapolis, Maryland. Students looking to serve among the nation’s elite naval officers may also want to consider enrollment in this federal service academy post high school graduation.

The mission of the Delaware Military Academy is to prepare young men and women for their next level of education and to provide them with a foundation that leads to good citizenship. The Academy’s  academic programs are offered in a mentally and physically disciplined environment with military training as a requisite for a better understanding of the obligations of citizenship and self-discipline. The Academy has received a superior rating from the No Child Left Behind (NCLB) act, and is Middle States Accredited.

The academy strives to provide its cadets with a well-rounded experience, offering a variety of extracurricular activities, such as marching band, music, a business professionals of America (BPA) club, dance team, model UN, and a yearbook club. A Cadet Council is also available to help teach cadets the importance of leadership and self-discipline. For students interested in athletic competition, the Academy offers such team sports as football, golf, cheerleading, cross country, soccer, volleyball, dance, and ice hockey.

The Academy also offers a naval junior reserve officer training corps (NJROTC) program that has earned distinguished academic honors from the United States Department of The Navy. The Academy is authorized to nominate eligible cadets for admissions to the U.S. Naval, U.S. Air Force, and U.S. Military Academies. Additional activities available for JROTC students include participation in the color guard, drill team, marksmanship, and community service activities that reinforce the importance of civic duty and selflessness.

The Delaware Military Academy has also earned high academic achievements in college preparedness. 97 percent of its graduates go on to enroll in an institution of higher learning, and receive, on average, greater than $12 million in college scholarships combined annually. The Delaware Military Academy is open to all applicants who are residents of Delaware. Interested students should consider attending an open house event and may submit an application during the open enrollment period, which takes place annually from November through January.

Located an hour from the Delaware-Maryland boarder in Annapolis Maryland, the United States Naval Academy is the coed, four-year undergraduate college of America’s naval service. The Academy was founded in 1845 by Secretary of the Navy George Bancroft. Today, the Academy serves as the final resting place of the Revolutionary War naval hero John Paul Jones, whose words,  ‘I have not yet begun to fight,’ are still inspiring our nation’s next generation of leaders.

The mission of the Naval Academy is to develop midshipmen morally, mentally, and physically, and to imbue them with the highest ideals of duty, honor, and loyalty in order to graduate leaders who are dedicated to a career of naval service with the potential for future development and to assume the highest responsibilities of command, citizenship and government. The ultimate goal of the Naval Academy is to prepare young men and women to become professional officers in the United States Navy and Marine Corps. Naval Academy students also act as active duty midshipmen in the United States Navy. Students who graduate from the United States Naval Academy receive a Bachelor of Science degree and are then commissioned as Ensigns in the Navy or Second Lieutenants in the Marine Corps where they serve at least five years.

In addition to preparing students for the disciplined service required of the Navy and Marine Corps, the Naval Academy also offers the highest academic standards within its military setting to prepare individuals for their future post-service. Required courses include naval science, engineering, and navigation and weapons systems, while courses in leadership, ethics, and military law help to build invaluable management skills. Physical education is also a cornerstone of the Academy’s curriculum that further prepares students for the fitness required of their future military service. Additional athletic opportunities are available for students in the form of men’s, women’s, and co-ed varsity and club sports.

The Academy offers an opportunity for qualified enlisted members of the regular Navy, Naval Reserves, Marine Corps, and other armed forces to be considered for a position as one of 170 active duty or reserve admissions. To help aid the transition back into academia for those who have been out of the classroom for a period of time, The Naval Academy Preparatory School (NAPS) acts as an intermediary step toward collegiate re-enrollment. In addition, former midshipmen are eligible for readmission to the Naval Academy. Separated midshipmen are required to be out of service one year prior to readmission.

Those interested in attending the United States Naval Academy should apply for admission between April of their junior year and January of their senior year in high school, though early admission is highly recommended. Detailed admission criteria can be found on the Naval Academy website’s Admissions page.

With close proximity to both a public JROTC program and a federal service academy, residents of the nation’s second smallest state looking for a military-based education have convenient access to two academies that offer coursework tailored to instill the values of leadership, discipline, and personal responsibility.

Whether preparing for the rigors of college, or the responsibilities of serving the nation, both the Delaware Military Academy and United States Naval Academy offer two distinct educational pathways, each of which looks to hold its graduates to the highest standards to ensure the development of each student’s greatest potential.