– boarding schools for girls or home for troubled teens.
Skip to content 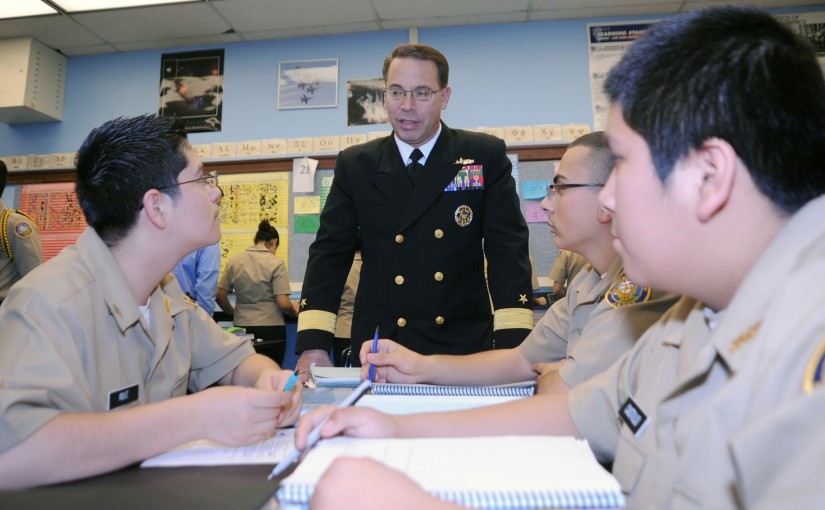 Many Illinois families encounter situations arise where the consideration of attending a military school is a preferred option.

There may be a family history of military service, a desire to get a solid insight into a possible career in the military, or a desire to live in a structured and disciplined environment. Whether it is a combination of these factors or others, you’ll find several quality candidates for public military schools in Illinois.

Located in Riverdale on the south side of Chicago, CMA is relatively young as a four-year military academy (chartered as a military school in 2000), However, the institution actually has a history dating back to 1947 as George Washington High School. As of the 2012-2013 school years Carver student performance on achievement tests allowed the school to increase its ranking to a Level 1 academic school. This is the top rank that a school in Illinois can earn

A Mission of Pride and Service

The school’s stated mission is to instill students with a sense of pride and commitment to public service while striving for excellence in academics and athletics.

While CMA operates in a military style and offers a full Junior Reserve Officers Training Corp program, the students ‘” called cadets ‘” have no obligation to enter military service upon graduation. However, cadets find their experience and participation in JROTC increases their ability to enroll in ROTC programs at the college level. These programs do offer financial aid and the possibility of a commission in the U.S. military service after graduation from college.

Activities with a Purpose

CMA offers unique activities such as fencing and orienteering. It also offers more standard extracurricular activities and sports for boys and girls. Academically oriented options include language clubs and an academic decathlete team. The stated goal of each activity offered at the school is to help instill a sense of honor, pride and accomplishment in each participating cadet.

As a public school, CMA has an early enrollment program, normally requiring applications to be submitted via apply.csu.edu by December of the preceding academic year. The school has seen increased competition for attendance with its rise in ACT scores, AP success, ranking as a safe environment, and an above-average attendance record.

Named for Admiral Hyman G. Rickover, Rickover Naval Academy follows the military traditions of its namesake. A graduate of the U.S. Naval Academy, Rickover is credited with creating America’s nuclear submarine superiority. While the school is not intended as a source of recruits for the military, it is affiliated with such groups as the Navy League of Chicago and the Illinois Amvets.

The school utilizes the Naval Junior Reserve Officer Training Corp program to provide the military organization, and focuses on leadership, discipline, problem-solving and academics. The goal is to prepare all students for college attendance and postsecondary success.

The program at Rickover is designed for students to enter during the eighth grade, although some students are admitted at each level on a space-available basis. It is necessary to submit an application and attend a scheduled Informational Open House to be considered for admission.

For students desiring both a military structure and an emphasis on Aerospace Studies, Air Force Academy High School fills that bill. You will find this school is committed to what it calls a ‘student-centered professional learning center.’

The school builds its military model around the U.S. Air Force culture and traditions, and the JROTC program supports a drill team, color guard and an Honor Flight. The focus on aeronautics and aerospace includes field trips to aviation-related locations and guest speakers.

Reflecting the newness of the nation’s commitment to military air power, AFAHS is the latest of the Chicago public military academies, founded in 2008. However, its graduates have already gained entrance to such respected colleges and universities as Cornell, Illinois Institute of Technology, and the United States Air Force.

Additionally, the academy is already ranked as a Level 1 school, the highest level possible. Several outside organizations and entities have ranked AFAHS as one of Chicago’s Top Schools.

As one of the state’s six military high schools, Chicago Military Academy is located in Chicago’s historic Bronzeville area. The school actually occupies the renovated Eighth Regiment Armory, which was home to the renowned all-black 8th Infantry Battalion.

A Proud History — A Bright Future

As the anchor element of the Bronzeville Revitalization Project, CMA is supported and influenced by a range of local and national entities and organizations. The goal is to ‘establish a world-class urban military academy.’ To that end, the National African-American Military Museum is co-located with the school.

The Chicago Military Academy at Bronzeville is organized around a military structure, and the cadets are expected to develop and excel in academics, personal accountability, and leadership. With a motto of ‘Pride and Respect’ the cadets are prepared for college and postsecondary school success. The college prep curriculum focuses on applied work in math, science and humanities. According to US News, CMA ranks first among all 116 Chicago public schools.

To meet this goal, the school emphasizes service and leadership, and is a recipient of the 2015 Gold Medal from the Jefferson Awards Foundation. Phoenix has received a number of other awards and recognition, including a listing among the top 25 Transformative high schools in America.

Students are referred to as cadets at the school and are organized in a military fashion. The organization is designed to support a team-teaching environment that ensures no student is ignored or left out of the learning process.

The student body also follows a military chain-of-command and cadets earn promotions based on their performance, participation and aptitude.

When considering Phoenix as a possible school, parents should be aware that they must attend an informational session at one of the six military academies in the state before submitting an application. The school’s website lists detailed requirements for potential attendees.

As one of the few military academies focusing on the USMCJROTC experience, the cadets at MLA  take particular pride in their commitment to honor, courage and commitment. School activities and academics are focused on a competitive approach to being the best and achieving excellence in all aspects of school endeavors.

However, academics remain the central priority at the academy, with the goal of preparing all students for a successful postsecondary educational experience at the nation’s finest universities and colleges. Because of its academic standards, freshmen applicants must basic requirements in math and reading scores.

Owned and operated by Marmion Abbey, Marmion Academy is a college-preparatory high school. The Catholic-Benedictine influence of the school is reflected in its male-only student body. Marmion has a three-fold focus of spiritual formation, leadership development, and academic excellence. Marmion shares these goals with its all-girl sister school, Rosary High School.

Marmion has occupied a unique campus of 325 acres located 35 miles from Chicago since 1933. The school was established by combining the staff and students from Jasper Academy of Indiana and Fox Valley Catholic High School. Marmion Academy students are known for their academic excellence, with the class of 2015 reporting an average ACT Score of 26.6 (compared to the national average of 21.0).

You will need to file an application for admission after the first of September for the December entrance exams. Shadow visits are encouraged for prospective students to evaluate their interest in the schools style of education.