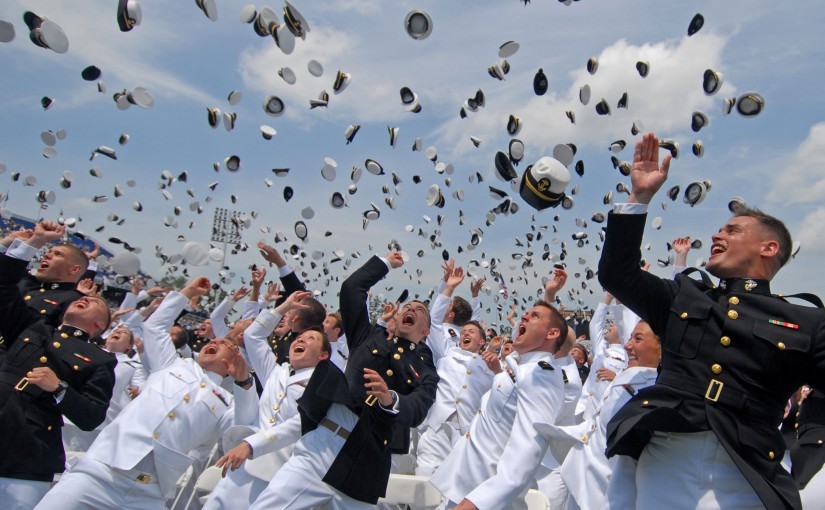 One of the 13 original colonies and now bordering our nation’s capital, the small State of Maryland has played a large role in the history of America’s military.

The land where Francis Scott Key penned the “Star Spangled Banner,” and the land where the Battle of Antietam turned the tied of the Civil War, Maryland has been an important port city throughout America’s military history.

Young men and women will find the state of Maryland a welcoming home for those looking to embrace the discipline and academic rigors of a military school education.

Located in Annapolis Maryland, the United States Naval Academy is the coed, four-year undergraduate college of America’s naval service. Students are reminded daily of the history of America’s military leaders while attending the Naval Academy, which was founded in 1845 by Secretary of the Navy George Bancroft. Today, the Academy serves as the final resting place of the Revolutionary War naval hero John Paul Jones, whose words,  ‘I have not yet begun to fight,’ are still inspiring our nation’s next generation of leaders.

Role of the Naval Academy

The mission of the Naval Academy is to develop midshipmen morally, mentally, and physically, and to imbue them with the highest ideals of duty, honor, and loyalty in order to graduate leaders who are dedicated to a career of naval service with the potential for future development and to assume the highest responsibilities of command, citizenship and government. The ultimate goal of the Naval Academy is to prepare young men and women to become professional officers in the United States Navy and Marine Corps. Naval Academy students also act as active duty midshipmen in the United States Navy. Students who graduate from the United States Naval Academy receive a Bachelor of Science degree and are then commissioned as Ensigns in the Navy or Second Lieutenants in the Marine Corps where they serve at least five years.

In addition to preparing students for the disciplined service required of the Navy and Marine Corps, the Naval Academy also offers the highest academic standards within its military setting to prepare individuals for their future post-service. Required courses include naval science, engineering, and navigation and weapons systems, while courses in leadership, ethics, and military law help to build invaluable management skills. Physical education is also a cornerstone of the Academy’s curriculum that further prepares students for the fitness required of their future military service. Additional athletic opportunities are available for students in the form of men’s, women’s, and co-ed varsity and club sports.

The Academy offers an opportunity for qualified enlisted members of the regular Navy, Naval Reserves, Marine Corps, and other armed forces to be considered for a position as one of 170 active duty or reserve admissions. To help aid the transition back into academia for those who have been out of the classroom for a period of time, The Naval Academy Preparatory School (NAPS) acts as an intermediary step toward collegiate re-enrollment. In addition, former midshipmen are eligible for readmission to the Naval Academy. Separated midshipmen are required to be out of service one year prior to readmission.

Those interested in attending the United States Naval Academy should apply for admission between April of their junior year and January of their senior year in high school, though early admission is highly recommended. Detailed admission criteria can be found on the Naval Academy website’s Admissions page.

The first military academy class was admitted to Forestville High School in 2002. Forestville High School quickly accelerated from a Battalion Junior Reserve Officer Training Corps (JROTC) program to a Brigade JROTC program. Today, it is one of the largest in the state of Maryland. The Forestville Military Academy offers a rigorous academic experience that prepares students for careers both in the private and public sectors.

The Academy’s Military Science program enables students to explore career options while challenging them to demonstrate competence, confidence, and leadership. The curriculum combines academic preparation with the essential values of citizenship, leadership, service, teamwork, self-discipline and self-reliance through participation in JROTC.

Students interested in the Military Science program should complete a career academy application.

Young men and women living in Maryland may also want to consider St. John’s coed College High School, a private college preparatory school located in Washington, D.C. Established in 1851, St. John’s is an independent, Catholic preparatory school for grades 9-12 with a mission of providing a quality education to young men and women from diverse socioeconomic and cultural backgrounds.  With an academic focus on offering a Christian education, the Academy is managed by Lasallian educators committed to the academic, spiritual, cultural, and physical development of its students.

St. John’s offers its students a 1:12 faculty to student ratio to ensure individualized attention. The school also offers varsity sports, emphasizes volunteer services, and boasts that 100 percent of its graduates are admitted into four-year colleges or universities.

Interested students should familiarize themselves with the Academy’s application process and key admission dates.

Maryland residents may also want to consider one of the 5 private military schools in the state of Virginia, or its public military school, Franklin Military Academy. Virginia also offers two military senior colleges for older students looking for a military-style collegiate program.

A Small State with A Big Impact

Though small in size, the state of Maryland has played a significant role in America’s military and formative histories. Today, Maryland is proud to develop some of the nation’s most disciplined, and accomplished naval and marine soldiers and scholars thanks to the contributions of the United States Naval Academy, and Forestville Military Academy. For adolescents with a focused interest in protecting America’s coastlines, Maryland offers an ideal setting with exceptional institutions.