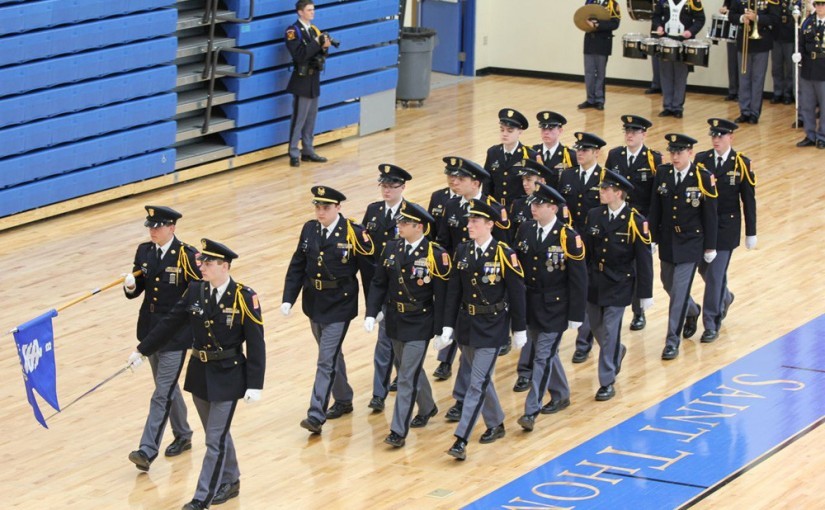 Parents searching for a military school environment in Minnesota have one excellent alternative for boys in grades 7 through 12. Other than that option, you will have to explore alternatives that include Junior Reserve Officer Training Corps programs in secondary schools.

A Catholic school based in St. Paul, Minnesota, Saint Thomas Academy is a highly respected day school for boys. The mission of the school is to provide a college-preparatory curriculum that ‘Develops and nurture the intellectual, spiritual, moral, and physical potential of each young man.’ The school was first established on the shores of beautiful Lake Mennith 1885 as a seminary. A military program was established in 1890 and Saint Thomas was designated a military school for boys in 1905. While initially a boarding school, that option was eliminated in 1974.

Saint Thomas has one of the oldest traditions as a JROTC school, with its first designation as such in 1916. However, its program was first recognized as an Honor School by the U.S. Army in 1908, and it has gained this honor nearly every year since. The school boasts of hundreds of alumni that have served locally, in state government, and in major national business and military roles.

From the academic perspective, Saint Thomas Academy is known for its success in doing more than focusing on good grades. The school focuses on ‘fostering knowledge, critical thinking, creative expression, communication, and independence.’

In addition to its demanding academic curriculum, the training at Saint Thomas goes beyond those traditional courses. Cadets receive instruction in such practical areas as time management, CPR and personal financial management.

When it comes to extra-curricular activities, Saint Thomas has one of the most varied selections available in any secondary school. In addition to the usual and not-not-so-common athletic teams (14), the school offers more than 30 other competitive activities. These include speech, chess, orienteering, debate and mock trial.

A Military Environment Focusing on Individuals

Saint Thomas seeks to develop individual responsibility and leadership capabilities through its participation in a very successful JROTC program. The students at Saint Thomas are considered to part of the Corps of Cadets. As such, they wear uniforms and follow a rigorous military schedule. Additionally, the leadership of the Corps relies on individual cadets who earn their positions and rank through performance and achievement.

Instructors in the Corps are all military veterans and oversee the individual training of cadets as well as the programs and activities of the Corps. These instructors help develop and communicate the importance of teamwork, personal discipline, and confidence. The Corps has a Commandant who has served in the U.S. Army and ensures the culture reflects a realistic approach to the education and development of the cadets.

Private School as an Investment

While Saint Thomas is a private school, it provides financial assistance to qualified students in the form of scholarships and other aid (More than $2.5 provided for the 2014 school year). In fact, many parents view the school’s cost as an investment to help with future education expenses.

More than 94 percent of the 2014 graduating class went on to top-tier colleges and universities, and those received millions of dollars in scholarships and grants. Graduates of Saint Thomas regularly receive appointments (and full scholarships) to one five federal service academies and ROTC scholarships.

As noted, there are limited options for attending military schools in Minnesota. However, in addition to the more than two dozen JROTC secondary programs, the state has a number of colleges and universities that support senior college ROTC programs. These include units from all branches of the U.S. military.

Minnesota State University boasts of the Maverick Battalion of the Army ROTC and the University of Minnesota is known for its Naval ROTC unit. Students in these programs receive substantial scholarships and financial assistance. Upon completion of their college education, ROTC students are offered a commission as Second Lieutenants in their respective branch of the U.S. armed forces.