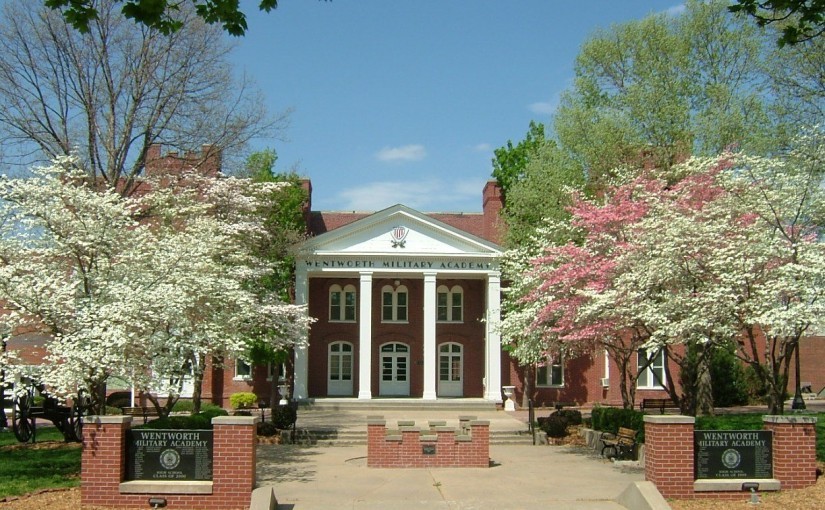 Missouri offers three excellent options for those parents and students desiring an educational experience within a military-themed environment. In addition to a junior college, there is a private boys-only college preparatory school and a public co-ed school for grades 9-12. If you are able to travel, Illinois to the northeast offers several other highly respected options for military schools.

One of the longest and proudest heritages as a military school in the United States is claimed by Wentworth Military Academy and College. In fact, the school was founded in 1880 in Lexington, Missouri, a town already known as the ‘Athens of the West’ for its focus on education.

Students at Wentworth are offered a unique boarding school environment, with coeducational classes for the 9th to 12th grades and a two-year junior college. Wentworth puts a primary focus on academic excellence, and is known for its very high rate of college placement. Due to its record of excellence, Wentworth Military Academy attracts students from more than 30 states and 11 foreign nations.

The school’s mission is focused on the development and advancement of the individual that will allow academic success to be used so that students will maximize their potential ”¦in academics, leadership, physical well-being, moral character, and self-discipline so they become productive citizens in a diverse, global society.’

Contrary to most military schools, not all students at Wentworth choose to join the JROTC and ROTC (junior college) programs. Approximately 42 percent of the secondary students wear uniforms and participate in the military-oriented training.

Due to the rigorous academic environment, students who desire to attend Wentworth should have a solid base in academic achievement. Approximately 65 percent of applicants are accepted after a detailed application process.

As a school for boys in grades 6 to 12, Missouri Military Academy also offers one additional year of post-grad schooling. It also has a number of co-ed summer programs, plus two separate leadership (ages 12-17) and confidence camps (ages 8-11) for boys. The school operates as a 501(c)(3) nonprofit organization and has a solid financial footing.

A Solid Past and Bright Future

With its roots firmly planted in 1889, the school has seen a steady development of its early 20 acres into a modern institution with state-of-the-art facilities. The school takes pride in its record of 100 percent placement of its graduates in top-tier colleges and universities. In addition, the schools position as a JROTC Honor Unit With Distinction allows it to nominate cadets to the federal service academies, specifically West Point, Annapolis, Air Force, and Kings Point.

MMA develops its entire program around its 360 ° Education concept that ’empowers boys and young men to unlock their full potential through a structured program of academic excellence, character development and leadership training.’

With one of the finest JROTC programs in the country, MMA students serve in a number of special positions and activities. Cadets earn rank and recognition based on both unit and individual performance.

Attendance as an Investment

As noted, Missouri Military Academy has great success in helping its students earn acceptance to the finest colleges and universities in the country. According to the school, its students were granted at least $5.7 million in scholarships for the most recent graduating class. Additionally, MMA prepares those students who desire military careers for both ROTC and service academy commissioning programs that cover most or all of a four-year education.

MMA seeks to maintain a diversified and highly motivated student body. The school has a detailed application process and seeks to identify prospective students with a desire to succeed and who demonstrate good moral character. To ensure it meets these goals, the school has a number of scholarships and financial aid programs.

If your desire is for your student to participate in a public, co-ed school with a military theme, you might find Cleveland Junior Naval Academy an ideal choice. Founded in 1981 as a magnet school in the St. Louis Independent School System, the school has quickly gained national attention.

Considered the largest naval academy in the country second only to Annapolis, Cleveland Junior Naval Academy has placed more than two dozen graduates at federal service academies and in colleges/universities with full ROTC scholarships.

A Diversified Environment without Compromise

The school was originally founded to aid St. Louis schools in its efforts to achieve a more diversified and desegregated educational environment for youth. Today, the academy is approximately 65% African American, 26% White, 3% Asian, 5% Hispanic, and 1% Native American.

Because acceptance at the school is by lottery, there is pride in the fact that every student attends and accepts the high standards by choice. There are also minimum academic and conduct standards for any prospective student applying to the academy.

Since the JROTC program at Cleveland Academy is sponsored by the U.S. Navy, the environment is centered on naval traditions and culture. The daily schedule follows a strictly disciplined routine based on naval standards. Students are considered cadets and wear uniforms (provided at no cost) each day. The Navy also provides considerable educational support with instructors and other resources.

Cadets also participate in a number of additional activities, including parades and an annual Naval Ball.

If you are seeking other opportunities to pursue your education in Missouri, you will find a number of quality JROTC and ROTC programs. For example, the University of Missouri has a nationally recognized unit, and there are approximately 11 other programs from all four branches of the U.S. Military. Among the benefits of ROTC are the availability of four-year scholarships and commissioning into the U.S. armed forces as an officer. In addition to these full programs, nearly three dozen secondary schools have JROTC programs for the Army, Navy, Marines and Air Force.