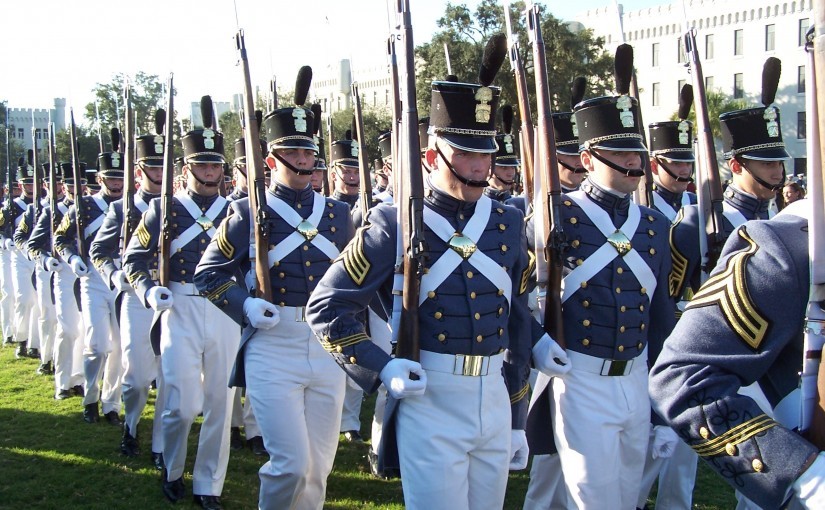 If you are a parent in South Carolina evaluating military school options, you live in a state with a long history of supporting the military. You and your prospective student will find one of the nation’s finest military colleges here, as well as,  public  and private  secondary school options.

There are also options to participate in both ROTC (college, university and junior college) and Junior ROTC (secondary school, grades 8-12).

Founded in 1842, nearly two decades before the start of the Civil War, The Citadel has produced a long line of successful leaders who have served in the U.S. military forces. With a Corps of Cadets of 2,300, The Citadel has a military student body second only to the federal service academies in size.

The reputation of the school attracts cadets from virtually every state and often as many as a dozen foreign countries. In fact, U.S. News & World Report consistently ranks The Citadel as one of the top public colleges in the south for those schools granting up to a Master’s Degree.

A Historic Setting and Proud Heritage

Also proudly known as the Military College of South Carolina, the school is located just 10 minutes from historic downtown Charleston near the Ashley River. Due to its location, the cadets of the Citadel were involved in the Civil War and, subsequently, the school had a roughly 20-year interruption in its role as a military school.

Since that time, graduates have served in every major U.S. military engagement. More than 2,900 Citadel graduates served in WWII, with 279 making the ultimate sacrifice.

The goal of The Citadel is to produce graduates who ‘stand as a bulwark of Duty, Honor, God and Country, and is dedicated to producing principled leaders for service to the state of South Carolina, and our nation.’ Graduates of the Citadel have served the nation in all capacities, from governors and U.S. Senators to business executives to engineers.

Incoming students join the Corps. The military environment is co-ed (93 percent male, 7 percent female), and the cadets follow a structured life style. There is a core focus on developing character and leadership skills, and these principles are incorporated into all aspects of the school’s academics, military training, and athletics.

As a proud military school, the Corps observes and preserves a number of traditions and ceremonies throughout the year. Students wear uniforms inspired by those of the U.S. Army and the service academies, and there is a cadet leadership structure that earns rank along with unit and individual awards and recognition.

Contrary to some military-themed schools, cadets at The Citadel have a broad number of undergraduate majors (20) and Masters programs (37). Additionally, 13 graduate certificate programs are offered. Studies cover such diverse fields as business, education, humanities, engineering and science.

As a public college, The Citadel follows an open admissions process based on individual qualifications. While there are evening undergraduate and online courses for non-cadet students, the primary school program assumes entrance to the Corps of Cadets during freshman year. The school also has a special program for veterans, as well as a respected post-graduate program.

The roots of the Camden Military Academy go back to 1892, while the current campus was first occupied in 1958. Today’s school is the result of combining three South Carolina military schools and academies, including Carlisle and Camden Academy.

Growth and Discipline to Achieve Potential

The academy today operates as a non-profit institution and serves as a college preparatory boarding school for boys in grades 7 to 12. If you are seeking a military-themed school that commits to instilling structure and self-discipline in boys, that is the stated mission of Camden Military Academy. The school promises, ‘Send us your boys, we will send back young men.’

While the school is not structured as a boot camp or a reform school, it is designed to help those who may be described by parents as ”¦underachiever, poor time manager, and lacking in self-confidence.’ To help these boys reach their potential, the academy maintains a demanding physical training and athletics program, a demanding academic curriculum, and a military-themed environment.

Camden Military Academy operates as a JROTC program and is designated an Honor Unit with Distinction by the Department of the Army. All high school cadets participate in the program, and they are trained in military and leadership skills in addition to normal college prep academics.

Students wear uniforms and live in dormitories structured around the four companies of the Corps of Cadets. Each company has an assistant Commandant who is responsible for monitoring the progress of each cadet on a personalized basis. The Cadet Challenge Program is designed to instill self-discipline and confidence while preparing each cadet to be an effective leader.

Parents have the option to test their son’s interest in a military-themed education by having them participate in one of the summer programs. This program also facilitates the full admission process after the summer session. Many parents see the cost of a private secondary school education as an investment to improve their son’s chances for full ROTC scholarships for college and for improved chances of admission to a federal service academy.

You will find an excellent option for a public secondary education in a military environment at the Toole Military Magnet Academy. Located in North Charleston, the Military Magnet Academy operates as part of the Charleston School District. Created just over a decade ago, MMA has quickly gained a reputation as one of the state’s higher-ranked public secondary schools.

Establishing a Tradition of Excellence

The school frequently receives a rating of Excellent and received in 2011 the Palmetto Gold Award for student achievement and closing the achievement gap. Parents are actively involved with the school and you will find a number of ways to participate to support your student’s progress. There is a quarterly awards ceremony to recognize the performance and achievement of the students of the school.

MMA operates as a military-themed school with an active JROTC program. Students wear uniforms provided at no cost. There is also a program to prepare students for careers in local, state, and federal law enforcement agencies.

These programs often offer attractive scholarships and an opportunity for commissions as officers in the U.S. military. Secondary schools throughout the state offer more than 40 different JROTC programs.