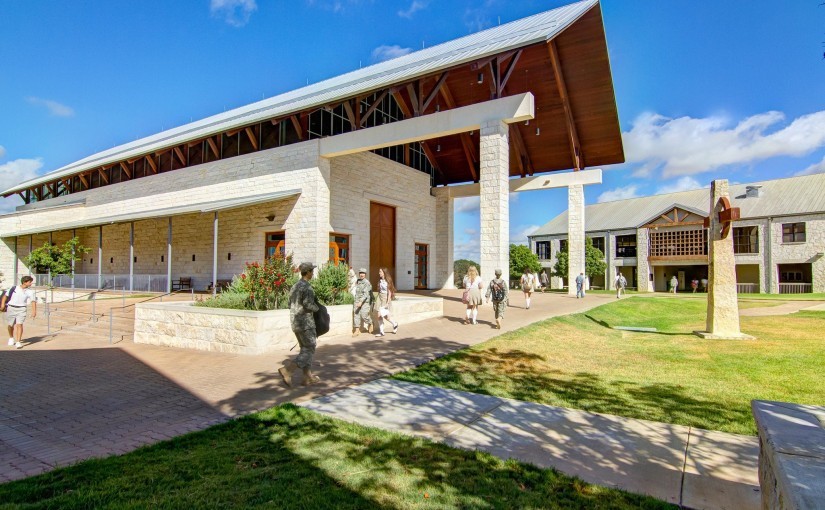 As you might expect from a state known for its cry of ‘Remember the Alamo,’ Texas lays claim to some of the best secondary military schools and college-level military programs in the nation. In fact, Texas A&M is one of only three colleges or universities that has a major military Corps on the same campus with civilian students.

Texas also boasts of a number of schools with Reserve Officer Training Corps for all services, as well as secondary schools offering JROTC programs. These opportunities are one reason so many Texas students end up at one of the five federal service academies and in military service at all ranks.

Founded in 1876, Texas A&M was the state’s first public institution of higher learning. Today, many different sources rank Texas A&M among the top five post-secondary military schools in the country, even when including the federal service academies.

The Proudest of Traditions

In fact, the ‘Aggies’ are often ranked number three among the elites, placed only behind West Point and Annapolis. This reputation has been hard earned, and it was only in 1965 that a student could attend A&M without being in the Corps. A further distinction belong to the Aggies is the fact the Corps has produced more uniformed officer for the American military than any other source other than the service academies. Moreover, eight alumni of the school have earned the Congressional Medal of Honor.

Located on 5,200 acres in College Station, the campus of A&M is one of the largest of any university. The town that now exists literally grew up around the train stop simply known as ‘college station.’ However, the area now host some of the finest research facilities in the world, and many cadets participate in advanced work not available at any other military school.

While the Corps of Cadets is also the largest in the nation other than the service academies, it is now only a very small part of the overall student body. Texas A&M is now the sixth largest university in the United States, with an enrollment exceeding 50,000 on all campuses. The Corps makes up only approximately 2,450 of that total.

Although only a small percentage of Aggies now join the military, A&M grads are known for being part of one of the most committed alumni groups in the nation. More than 370,000 grads take great pride in being part of the ‘12 Man Tradition,’ and graduates gather around the world for annual Roll Calls and football game viewings.

The academic foundation of Texas A&M was built to provide the rapidly growing state with the agricultural experts and engineers it so badly needed. Graduates today pursue all conceivable fields of study, and member of the Corps are not restricted from any disciplines they desire to pursue.

The stated mission of the Corps is to ‘develop well-educated leaders of character who embody the values of HONOR, COURAGE, INTEGRITY, DISCIPLINE and SELFLESS SERVICE.’ If you are interested in joining this elite group, you must first be accepted by the university as a qualified student. Once admitted, you can apply for admittance to the Corps. There is also a special program for potential cadets to attend Texas A&M Maritime Academy (TAMU-Galveston) if not admitted to the main school at time of application.

Membership in the Corps does not automatically incur a military service commitment. However, the Corps is divided into areas of special military service interest, including Air Force, Army, and Navy-Marine Corps. There is also a special band unit, known as the Fightin’ Texas Aggie Band.

As a public university, Texas A&M has preferred tuition for in-state students. However, many students from out-of-state apply and attend the university due to its reputation as ‘one of the best schools for the money.’ Cadets in the Corps generally qualify for ROTC scholarships that cover all tuition and many of the fees charged.

While actually an integral part of the Texas A&M system, TAMU-Galveston provides a public college education. The school is composed of a Corps of Midshipmen pursuing one of several programs for military or Merchant Marine service. The graduates participate in the Merchant Marine Licensing (LO) program. Both Graduate and Undergraduate Midshipmen work towards being licensed as Merchant Marine officers. The Naval ROTC program provides scholarships, and the midshipmen may apply for Strategic Sealift Officers Program (SSOP). Depending on the contract signed and the aid received, midshipmen are required to serve in the U.S. Navy upon graduation.

Texas offers a mix of co-ed and boys only private schools if you are seeking a military environment for your child. The three schools are located in the southern parts of Texas, and are widely respected both nationally and internationally.

Founded in 1965, Marine Military Academy is a boys-only institution for grades 8 through 12. The school also offers one year of post graduate study. While MMA is not officially associated with the United States Marine Corps, it closely adheres to its principles, traditions, and culture. In a relatively short period of time MMA has gained an international reputation as one of the most successful military schools for boys and young men.

While not a school for troubled boys, MMA provides itself in success at providing young men with an environment that fosters future success.  The mission of the academy is to ‘develop disciplined, morally strong, college-ready young men who are prepared for responsible leadership.’ The school fulfills this mission with an openly patriotic, demanding and structured approach to quality education.

Many former Marines and graduates of MMA loyally support the academy in its work. There is an aggressive effort to make the school affordable for every boy that will benefit from its environment. If you are a parent who is on active duty, your son will receive at least a $1,500 tuition credit for each year of attendance.

San Marcos Academy is consistently ranked as one of the nation’s leading co-educational college preparatory schools. Affiliated with Texas Baptists, the school is located between Austin and San Antonio. SMA is one of the oldest boarding schools in Texas and celebrated its centennial year in 2007.

The military roots of the school date to World War I, when the school was authorized to start a JROTC unit. All boys attending San Marcos Academy are required to participate in the JROTC program during their first semester of attendance. Beyond this initial requirement, participation in JROTC is voluntary for both boys and girls.

Students who choose to join the Bear Battalion of the SMA JROTC wear uniforms to class and participate in special activities, such as the Leadership Lab and the Dining Out program. The JROTC unit is used to promote discipline, leadership development, and personal accountability. Participating students earn various awards and promotions based on their performance.

SMA accommodates transfer and international students by accepting applications throughout the school year for both day and boarding students. The process can be initiated online and submission of an online or written application must be accompanied by a $100 non-refundable fee. No student (with some exceptions for out-of-state applicants) is admitted without first undergoing a personal interview.

TMI – The Episcopal School of Texas

The Texas Military Institute Episcopal School of Texas, fondly referred to as TMI by many, is located in San Antonio. Founded in 1893, the school has known three different homes. Although the school operates as a military-themed day and residential school, it is often listed at the top of rankings for all private schools. As a coed school with just under 600 students (roughly 50 as residential), the school provides classes for grades 6-12.

Academics as a Top Priority

Admission to TMI is very selective, and the academics are demanding. The school is known for its 100 percent college acceptance rate, and TMI alumni are found in all the top universities and Ivy League schools.

The school operates on the concept of Four Pillars of Development, which include academics, athletics, military, and spirituality. More than one-third of the student body participates in the school’s JROTC program, nationally recognized as an Honor Unit.

A Strong History of Supporting the Military

The respected private and public schools in Texas are only a small part of the state’s support of and participation in the military. Accordingly, there are several dozen ROTC programs representing all four services at colleges and universities throughout the state. Additionally, there are more than 100 secondary schools, public and private, offering JROTC programs for the different services.

If you feel your student would benefit from a structured education with a military theme, you’ll find attendance will greatly improve the probably of acceptance for post-secondary education. Likewise, participation and success in JROTC programs often improve the possibility of being selected for an appointment to one of the five service academies. This provides tuition-free education at the highest levels of academic excellence.