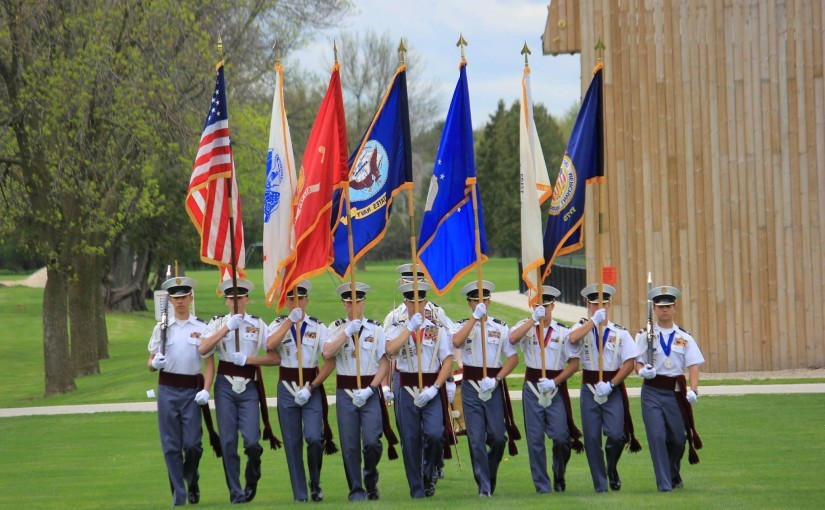 Parents and students in Wisconsin have two distinct alternatives for pursing a military-oriented education. The first of these is a private boys-only college preparatory school with more than a century of experience and tradition, the other is an innovative and well-respected public magnet school.

The state has no options for junior or senior military college experiences, although there are more than 30 colleges and universities that offer Army, Air Force, Navy and USMC ROTC programs.

With a proud history dating back to 1884, St. John’s Northwestern Military Academy has carved out a special niche in the world of military secondary school. If you are considering either military boarding schools or a standard day school, SJNMA fulfills both options.

As a male-only institution, SJNMA is dedicated to providing those experiences and resources that help its students succeed in postsecondary environments, both military and civilian. The stated focus of the academy is ‘academy’s focus is on instilling values in these young men like integrity, teamwork, a great work ethic, leadership skills and a desire to be learners throughout their lifetime.’

The school fulfills these goals by operating in a military environment modeled around the U.S. Army model, using a Junior Reserve Officer Training Corp program. Cadets are immersed in a world of tradition and heritage, all with the purpose of developing the individual and the sense of teamwork. This includes wearing uniforms, participating in regular formations and parades, and offering such activities as Color Guard, Drill Team and the popular Raiders.

The military structure include the use of rank and earned promotions, as well as an award and recognition system that provides incentive and clear incentives for performance. While the curriculum and standard are challenging and competitive, the school never ceases to maintain a student-centered atmosphere.

An Attractive Return on Investment

If you are evaluating a military school option, financial considerations are, of course, a factor. While SJNMA is a private school with tuition costs, it prepares students for free top-tier college educations at the academies and scholarships via ROTC and athletic participation. The school makes its case for investing in a private secondary education at its institution on three basic points:

Of interest to Wisconsin parents is the fact that ‘Beginning in tax year 2014, Wisconsin parents/guardians are eligible for a deduction per child enrolled at SJNMA.’ The tuition for the school is dependent on the student’s status as a boarding cadet or a day student. There are some tuition assistance programs, depending on need.

While admissions are competitive, SJNMA is dedicated to accepting students who need and desire the additional structure a military school environment provides.

As one of four separate academies at the public Indian Trail High School, Kenosha Military Academy offers a uniquely military approach. The students who attend the school as part of KMA participate in a highly respected Junior Reserve Officer Training Corp program and wear military uniforms (provided free by the U.S. Army).

The academy maintains a rigorously military environment with regular exercises, a recognition program that allows rank to be earned, and a military command structure. The JROTC program provides four years of specialized military instruction in leadership, military history and military sciences.

The cadets in the Kenosha Military Academy mix with the students from the other academies in different events and activities, but they stand apart due to their uniforms. There is additional athletic training provided for the cadets and several military-related activities for cadets only, such as drill and color guard. Also, most of the KMA cadets participate in JROTC summer camps and programs in different military disciplines.

While students at KMA do not incur any military service obligations, they do acquire experiences and insights into such values as discipline, personal accountability, leadership, integrity, honor and service. These are all traits that prove invaluable in pursuing careers in the military, government agencies, and law enforcement. It also increases the potential for receiving an appointment to one of the service academies or selection for postsecondary ROTC programs.

Indian Trail High School is actually five separate schools, including the four academies and a traditional high school. Under Wisconsin law, the school and the academies are open enrollment schools, and students are not required to live in the school’s district. However, you as a parent are required to provide transportation if out-of-district, subject to some reimbursements and credits.

While all students are allowed to apply in the normal period between February and April, there are certain appealable reasons for which acceptance is denied. Application to the school is the same for all five options, and your student will indicate a preference if they desire the military or other academy as their first choice.